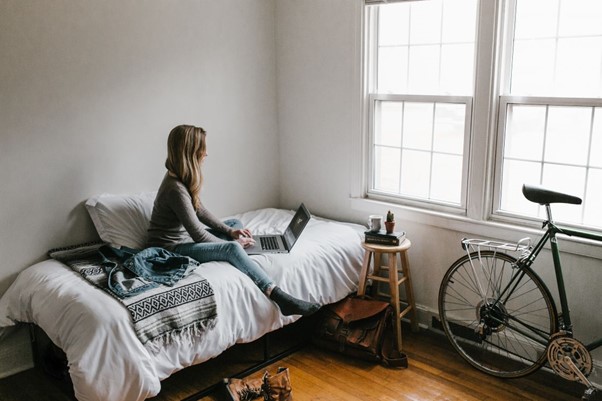 Graduation always brings a mix of emotions. Mainly of joy and excitement to be entering the working world, but also a little anticipation of what happens next and perhaps a little sadness that you'll be saying goodbye to another chapter of your life.

But if you're graduating during a global pandemic, those emotions will likely be intensified as jobs look uncertain and the economy bows under the pressure of Covid-19's weight. That might sound a tad "doom and gloom", so first – here's some warm reassurance. We started Creative Boom following the global economic crisis of 2008, and even though times were difficult, graduates found a way to survive. They did find jobs, eventually. Or they carved their career by going freelance or starting side projects – those same graduates are in their thirties today and are doing great.

We can't sugar coat it, however. Although opportunities do exist, you're entering a competitive jobs market. How you approach potential employers and contacts could determine what happens next, so we asked a bunch of creatives and agency owners to share their tips for job seekers on how to stand out and get noticed, as well as the things you should avoid doing.

Get in there early

Who says you have to start applying for jobs after graduation? Ok, this might be too late for those of you fresh out of uni, but anyone entering their final year in September, take note! "The best piece of advice my university gave me was to start applying for jobs as soon as you begin your final year," says Liverpool-based designer and illustrator, Gracie McFarlane. "I applied for my job in December and started after graduation. Don't start applying when the competition is at its most fierce."

Make each application bespoke and tailored to the agency

As creative director Tom Heaton says, "If you send a templated email, you'll receive a templated response. Make it genuine and open a dialogue. It'll take ten times as long but you'll get ten times the response."

Don't just send out a blanket email, hoping someone will bite; get personal, do your research and tailor your application to the job opportunity. Find out the name of the agency owner or person in charge of hiring. "Do ten applications well and bespoke rather than 100 generic applications," says Phil Cookson, founder of the specialist recruitment firm, Creative Resource.

"Show interest in the company you want to work at, in your cover letter and interview," adds Jantine, a designer and illustrator based in Rotterdam. "Namedrop their projects, talk about what you love about them and what you could contribute to projects like that."

And if we've not yet hit the message home, Stuart O'Donnell, co-founder of Boardwalk Studio in Manchester adds this clear warning: "I get so many emails from people looking for work and will instantly delete the email if they haven't personalised it. Doing some research into our business and our work also helps. I'd advise being politely persistent and always try to stand out."

Show some personality but not too much

Remember, business is about people, so don't be afraid to reveal some personality. "Show 'you' more than your portfolio," says Mark Leary. "Loads of people have the skills but there are few I'd want to be stuck in a studio with on a tight deadline."

Also, be your authentic self, as motion designer Caroline Le advises: "People want to get to know who you are. Be genuine and willing to help. Be humble and learn from every experience. Be a good listener and absorb all the knowledge you can from your peers and mentors."

But don't go too far; always remain professional. For instance, "I was once given a business card by a grad, and his email address was 'Jizzmonkey (at) hotmail.com'; it wasn't the most pro way to start our correspondence," says Jamie Ellul, designer and creative director at Supple Studio in Bath. Yes, we can chuckle but it's something to avoid.

The pond is small, so watch your step

Careful how you approach agencies. Because people remember and people talk. One agency owner in a city is likely to know dozens more. So bear that in mind when you email or call potential employers.

"It's entirely possible you're not ready," says Mark Diamond, a Scottish art director and writer based in Ireland. "So when you experience your first batch of rejections, don't burn your bridges! I've often kept my eye on green but promising designers and hired them later based on how professional their interaction and reaction was."

Roughly 98 per cent of those who email me, asking about job opportunities, never reply and say thank you after I've explained no jobs are available but wish them success.

To the absolute diamonds who do show their appreciation, I'd like to say thank you – from the bottom of my heart. Thanks for understanding that I'm busy. Thank you for valuing my time. It sticks in my mind. And by saying thanks (which takes two seconds, by the way), you might encourage me to put you in touch with people in my network.

Danielle Molyneux, Founder of Studio Dotto in Manchester, puts it beautifully: "Do your research before getting in touch. Say why you're reaching out to them specifically. It's ok to ask for advice and help but understand not everyone has time. It's not personal. Always follow up, acknowledge people's time, and say thank you. Good luck!"

Only include work in your portfolio that you want to do

"Tailor your portfolio work style to the brands you want to work for," says designer Ben Gilchrist, head of design at Freehouse and founder of Typespire. "If your style looks like Adidas, it's unlikely to get you a job at Harrods. The same applies for; if your portfolio has 75% print projects, you will unlikely get a role as a digital designer. I think portfolio analysis is something that is often overlooked at graduation."

Creative and digital marketing specialist, Stephen Voisey says your portfolio also has to stand out: "Designers have to sell themselves, and in the modern age, that is all about grabbing people's attention. Your designs should make potential employers curious and excited to see more. Offer a newsletter to see your latest work. Play the long game."

And when it comes to talking through your work at interview? "Simple," says Ross G Palmer, "know your portfolio! Don't put work in without rehashing what you're going to say about it when you turn the page. Treat it like a pitch, sell it. And be honest about what your involvement was, if it's a group project."

Think beyond the job application process

"Instead of just applying to jobs (which is a bit of a lottery), try to cultivate interest," says London-based graphic designer Greg Bunbury. "Do this by building authority, content, and personal projects – be a design entrepreneur. Show the world what matters to you. If you build it, they will come."

"A strategy that works well is to ask for a chat and advice, not a job," advises designer and illustrator, Iancu Barbarasa. "Most people are nice and will say yes. If they like your work, they will keep you in mind and get in touch later, or recommend you to other people. That's how you can build a good network."

Iancu's right; it's about going beyond asking for a job, as Everyday Something believes: "Ask for advice, feedback on your portfolio, maybe a chat or coffee – once you get a conversation going, it's easier for the studio to see you as part of their team in the future."

Getting out there into your local creative community, meeting agency owners and making friends, will serve you well long-term. Become someone people like and know. Do favours for others, if you can. It's like with anything in life: a little "give and take" can make all the difference.

Building a network pays off, as it did for illustrator Vicky Scott: "I met a client through a gift shop who stocked my work, nearly a decade later they now make up a huge chunk of my illustration income. I also met my agent through a friend of theirs, seeing me at a craft fair."

And "If you're black or a person of colour," says Leyya Sattar of The Other Box, "you should find creative communities you can join. Speaking from experience, the lack of diversity and access to opportunities can wear you down, and make you question your place, but stick with it and find your people."

With that in mind, Leyya has launched a Jobs Board, as part of her growing community, which now has 3,500 members. "It’s where people can get advice and support and a safe space away from microaggressions and day to day inequalities we face as people from marginalised backgrounds," she adds.

Not seeing many jobs out there? Designer Robbie Kerr has this gold advice: "Don't just wait for positions to appear. Email studios you want to work for, build as many contacts as you can. Ten years into my career, I've never actually applied for a job through traditional methods. Make a nuisance of yourself and opportunities will present themselves."

And if you're still not having much luck? "Agencies and studios aren't the only paths," says James Ashe, a visual artist based in Belfast. "Be prepared to go it alone, as there's no shame in taking a job outside illustration and design."