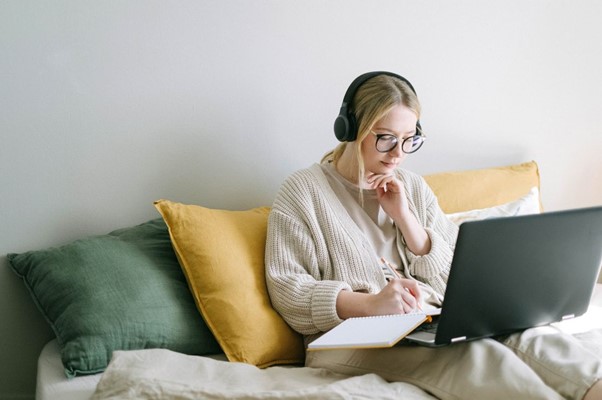 While many professions have been struggling in 2020, the need for visual designers has not disappeared. Indeed, from the urgent need for new signage to the broader shift of retail to online, the demand for talented designers has only been increasing.

Below, we outline six solid reasons why visual design will be increasingly in demand over the next decade and beyond; and why anyone who learns and develops these skills will have their pick of the best and most rewarding jobs.

This article has been developed in partnership with Created; the online academy celebrated for its fully remote learning environment. Designed with and delivered by industry leaders, Created's hands-on, flexible courses provide you with the skills and personal development you'll need to thrive as a creative in the 2020s.

It's difficult to imagine that lockdown would have worked in any other era. From family fitness sessions on YouTube to business meetings on Zoom, the internet has been the glue that's allowed us to physically shutter large parts of society.

As a result, every company, big or small, is realising it has to exist on the web in some form. And that isn't just a technical challenge; it's equally a visual design one. Quite simply, with websites, apps and other services needing to become more usable and attractive to a mass public, only visual design can supply the solution.

This is why when some creatives, such as fashion designers, might be losing their jobs right now, UI (user interface) and UX (user experience) designers remain highly in-demand and are attracting very substantial salaries.

This need for a digital presence is most urgent in the retail sector. During the lockdown, most physical stores had to close completely, and eCommerce suddenly became the only game in town. Even though restrictions have eased, local lockdowns and the general reluctance of people to come into busy shopping centres continue to stifle physical sales.

And that's not all. More fundamentally, people who previously won't have gone near digital shopping have now got the habit, and it's likely to stick. Which means that eCommerce will probably continue to grow, even when Covid becomes a distant memory.

In short, any retailer who doesn't innovate online is going to die. And so visual designers are likely to be most demand from the retail sector, as every store and chain tries to redesign their digital presence in a way that makes shopping easier and more attractive to consumers.

3. Advertising is having to work harder

Fewer trips to the shops is just one of the societal trends that the pandemic has accelerated. What about fewer visits to the office too? That's another trend that's likely to stick, post-pandemic, and this all adds up to one big trend. People are going to be spending less time in busy town centres, and more together at home. Which means brands are going to have to work even harder to reach them, and once more, that's where visual design comes in.

If people see branding like in-store promotions, posters and billboards less frequently, that branding will have to work harder and harder. Brands won't be enough to rely on tried-and-tested approaches: inventive and imaginative strategies will be needed for them to survive.

More than ever, brands will need to understand the customer and their journey and make physical and digital media work together in harmony. And that's essentially the job of a visual designer, who must see each task within a design project as part of a whole, and understand it as servicing a fuller story. Only by getting those small but important details right will brands be able to cut through the noise and grab people's attention, both online and off.

Not many companies have benefited from lockdown, but the streaming services certainly have. Netflix, Amazon Prime, Disney+ and others have seen record growth, and are currently pouring eye-watering amounts into content production as a result. Which is great news for creatives everywhere - even visual designers.

You might not think of visual design relevant to your favourite films and shows. But it actually plays a huge role, in everything from crafting title sequences to planning set design, not to mention all the marketing and promotion that's increasingly necessary in a confusing sea of screen content.

In short, visual design is a good way into the TV and movie business, whether you want to work as a visual designer or expand your skillset into related areas like motion graphics and VFX. Either way, there are more opportunities right now than ever before.

Want evidence that demand for visual designers is booming? Then just type 'design' into any recruitment website at the moment, and you'll see a wide range of well-paid jobs appear. Which, given that we're in the midst of a recession, is pretty darned impressive.

At the time of writing, for instance, The Guardian has 36 design jobs listed in the UK, with salaries ranging from £20-25K for a junior designer, right up to £55-60K for an experienced packaging designer. How many other professions that don't require a university degree can boast that, especially at the moment?

Jobs that you can apply for with visual design training include graphic designer, UI designer, UX designer, product designer, social media designer, VR designer, web designer, app designer, packaging designer, motion designer, print designer, interaction designer and more, as well as countless opportunities for freelance designers. That might sound like a bewildering array of titles, but it points to a basic truth: that visual design allows you to focus on the career direction that suits you, rather than a linear path decided by others.

Finally, what of the future? Is visual design a skill that will help you have a career for years to come? We'd say a confident 'yes'.

Fundamentally, visual design is not about making pretty pictures; it's about solving problems. And with the world facing an uncertain future, there are only going to be more problems to solve, and thus a greater need for visual designers in future.

By 2050, the move to a digital world is likely to put a lot of people out of work. We already see automated stores with no retail staff at all. Drivers, maybe even pilots, will be superseded by self-driving vehicles and delivery drones. Even much of the work of architects, lawyers and accountants could be taken over by artificial intelligence.

But there's one thing computers find very difficult to do: think creatively. For that, you need designers, and so we're convinced that visual design is one of the few professions you can count on to be future-proof.

Get started in visual design with Created

Created is an entirely new kind of academy, that's committed to giving you the kind of skills creative people need to succeed in the real world. Its new Visual Design Foundation course has been built to reinvent your skills for today's digital market. You'll get to practise executing digital design across devices, with pivotal industry feedback to keep you on track, as well as working, supporting and collaborating with other budding creatives.

Taking place entirely online, this three-month part-time course is the ideal way to get started in visual design. The course begins on 2 October, and places are still available. Find out more at created.academy.

Asking for a Friend: How Do You Learn to Manage People?
From branding to Bake Off: inside the delicious world of food illustration
Can “visceral” graphic design bring the plastic crisis to life?